There are more than a thousand varieties of bananas, but only a few hundred types of coffee. How can this be, when the planet would explode daily without coffee? There are still many mysteries and secrets to be solved in the knowledge of the coffee plant. With bananas, we are much further along. World Coffee Research has made it its business to research and develop the coffee plant.

Why is science crucial for the cultivation of coffee?

Climate change, novel diseases and pests make life difficult for the coffee plant and farmers. World Coffee Research ensures that our planet does not run out of coffee. Coffee experts and scientists in over 26 countries delve deep into the coffee plant and develop innovative ways to offer coffee farmers a sustainable future. With this new project you support World Coffee Research with 1 € per kilogram of coffee.

How can I imagine the work of World Coffee Research?

The core of the work of World Coffee Research is the exchange of knowledge.
Let’s take a brief look at the history of cultivating coffee. Coffee has a turbulent past. Already centuries ago, coffee plants of various species grew wild in countries around the equator. During colonisation, coffee species were shipped between continents in order to cultivate the plant in even more places. This led to an uncontrolled mixing of species. Which is not wrong per se, but that makes the coffee plant family tree difficult to trace.

Today, coffee is cultivated in Africa, South and Central America and Asia, often in small-scale farming structures. The craft of growing coffee is passed on from generation to generation. But very few farmers are able to name their coffee varieties precisely. The lack of knowledge about coffee varieties and general makes it extremely difficult for scientists and farmers to develop new varieties to respond to new challenges such as climate change, drought or pests.

We support this by funding the second Annual African Breeders Hub, where scientists and farmers from over nine African countries meet with local agriculture ministers.

The World Coffee Research team analyses the genetic make-up of the world’s best coffee plants and modifies their genetics so that they learn to withstand today’s conditions and increase their yield and quality. The wonder plant and the hope of the scientists is called „Hybrid F1“. Under this guise, the result of years of research is hidden. A total of 54 crosses were created from plants whose parents were classified as particularly suitable varieties. These include varieties that are characterised by their high quality and special robustness.

But now it takes time. A coffee tree needs two to three years to grow and bear cherries. The breeding of new varieties can take up to 20 years. The first plants were planted two years ago in Central America and Rwanda and have been continuously observed by farmers and experts ever since. Whether the first power plants are already among them? The coffee world is hoping so, because climate change is not going to wait any longer. 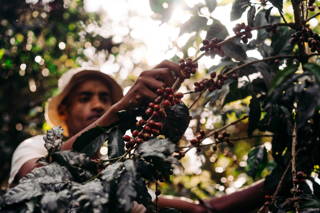