Anyone who is familiar with coffee cannot avoid the terms „Arabica“ and „Robusta“. Here are some differences.

100 % „Arabica“ is probably the best known marketing argument that every coffee drinker knows. In the supermarket, this statement promises the highest quality, while „inferior Robusta“ beans are only added for cost reasons. At least that’s the prejudice. However, hardly anyone knows more about the actual differences between the two types of coffee, Coffea arabica and Coffea canephora, which is usually referred to colloquially as „Robusta“. This is where the misunderstandings start, because strictly speaking „Robusta“ is actually the name of a very widespread variety of this species. Over time, the term „Robusta“ has become synonymous with the C.Canephora coffee, although this is not the correct term for it. And what’s the point of the bad reputation of „Robusta“?

In total we know more than 100 types of coffee, all of which are named under the generic name Coffea. However, apart from Coffea arabica and Coffea canephora, the few other cultivated species (e.g. Coffea liberica) account for only about 1 % of the volume traded.

Coffea arabica, a hybrid of Coffea eugenioides and Coffea canephora, has been known in Ethiopia since the 7th century and was first described in 1753. Interestingly, Coffea canephora, originally from West and Central Africa, was not recorded and described as a species until over 100 years later. However, we now know that Coffea arabica is about 10,000 – 15,000 years old, while the age of Coffea canephora is estimated at about 100,000 years. Countries such as Brazil, Colombia and Ethiopia are now known for their Arabica coffees. Arabica coffees account for about 60 – 70 % of the worldwide coffee volume, whereas Canephora coffees only account for 30 – 40 %. This is mainly produced in countries like Vietnam, India and Indonesia. The share of Canephora is constantly growing and for this reason alone deserves a differentiated consideration. 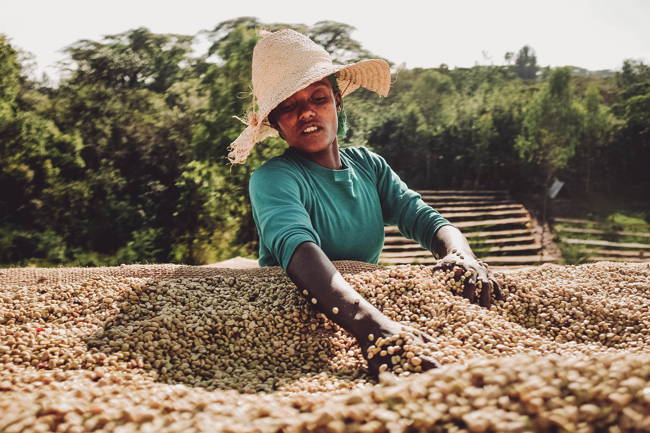 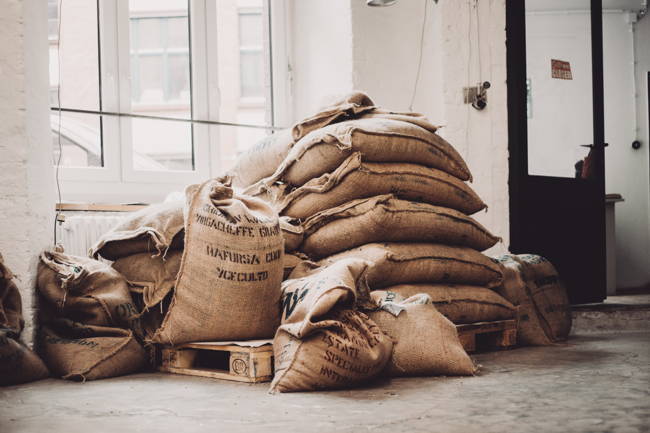 The differences become apparent here and it becomes clear where „Robusta“ coffee gets its name from. Arabica plants are grown in higher growing areas from 600 m to 2,300 m. The altitude influences how fast the cherries ripen. The higher the plant grows, the slower it ripens and therefore has more time to develop complex aromas. Arabica plants need constant temperatures around 15 – 25 °C, without weather extremes such as drought, frost or similar.
Most Arabica varieties prefer growing in the shade and do not tolerate too much direct sunlight. However, it should be added that some Arabica varieties can now also cope better with direct sunlight.

As the name of „Robusta“ suggests, Canephora is in some respects more robust and resistant than its relatives. Canephora is less sensitive to temperature fluctuations, strong sunlight and insect infestation. The plants also grow at temperatures of up to 36 °C and at low altitudes from 200 m. In addition, Canephora has a higher yield than Arabica, so the plants produce more coffee cherries. If the plants are not cared for and pruned back, they can grow up to 10 m in height, while Arabica plants can only reach a maximum of 8 m. 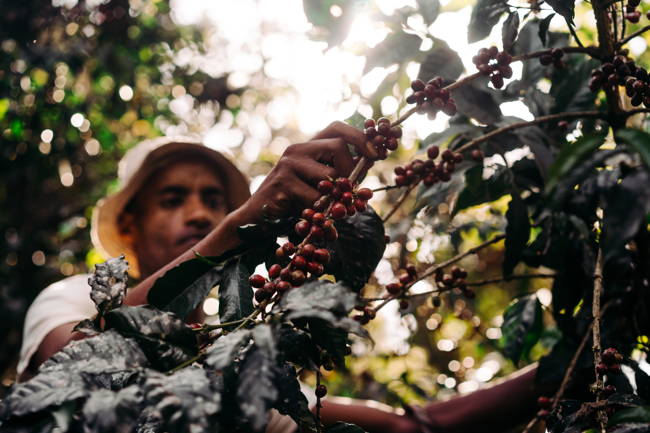 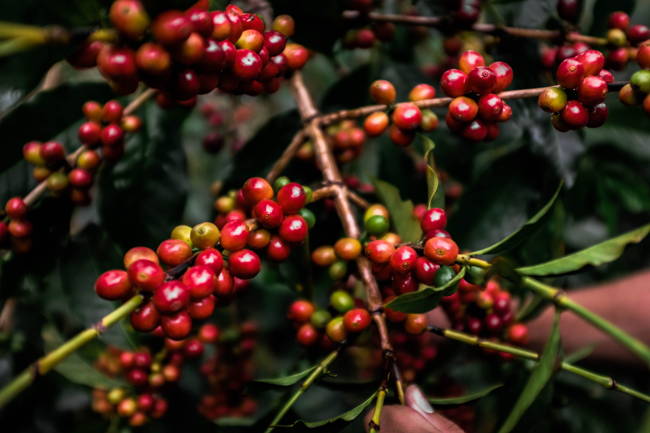 When fully grown, the plants not only reach different sizes, they also differ in the appearance of the leaves and beans. The leaves of the Arabica plant are oval. Canephora leaves are rounder and slightly smaller. While the Arabica bean is known for its oval shape with a narrow S-shaped cut in the middle of the bean, the Canephora bean, on the other hand, appears almost roundish with a straight, wide middle cut. It is generally said that Arabica beans are slightly larger than those of a Canephora plant, but this depends heavily on the variety.

Even inside, not everything is the same. Arabica has 44 chromosomes, Canephora only 22, and it is worth mentioning that Arabica plants are self-pollinating and have a deeper root system. There are also Arabica varieties in which Canephora has been crossed to increase resistance to some diseases.

The very fact that Arabica and Canephora are grown in different regions under different conditions suggests that they are not exactly similar in taste either. After all, the place and conditions of cultivation and the careful preparation of coffee are decisive for a good taste. There is a tendency to compare Canephora and Arabica coffees, which is problematic. For example, one could compare oranges with grapefruits. There are good grapefruits, but a grapefruit will never be a good orange. A taste comparison seems unfair, as these two species are very different. Arabica coffee is more nuanced in taste. It can be recognized by the finer, fruity, generally more complex taste notes and the more intense acidity. It also has a higher sugar content and a lower chlorogenic acid content.

The typical Canephora taste often appears dark chocolaty, nutty, earthy and somewhat bitter. But especially Southern Italians appreciate this, as the stronger tone melts with sugar to a caramel tone. This is also the reason why traditional espresso blends often have a Canephora content of almost 50 %. It is also possible to create a round and fuller body by adding Canephora. Those in need of caffeine will be interested to know that C. Canephora contains about twice the amount of the stimulating substance.

Canephora usually has a richer and longer lasting crema due to the lower lipid content and higher CO2 content after roasting.

Among other things, the colour of the crema makes it possible to identify the composition of the coffee blend: For example, a 100 % Arabica mixture results in a crema, which often has a reddish-brown colour. Often, the signature „tiger skin“ pattern is created. In a 100 % Canephora blend, the crema is more characterized by a dark brown colour with grey tones. 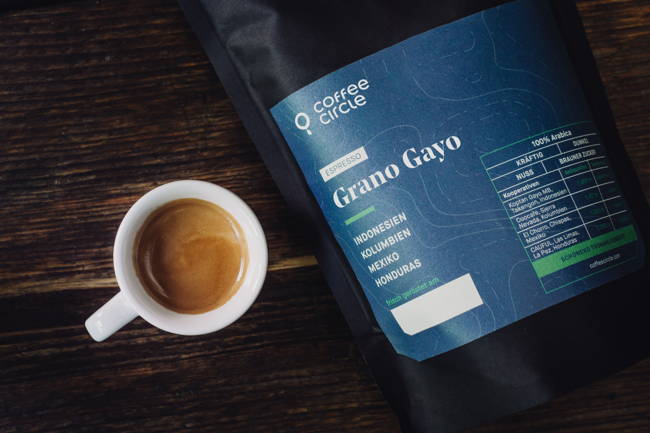 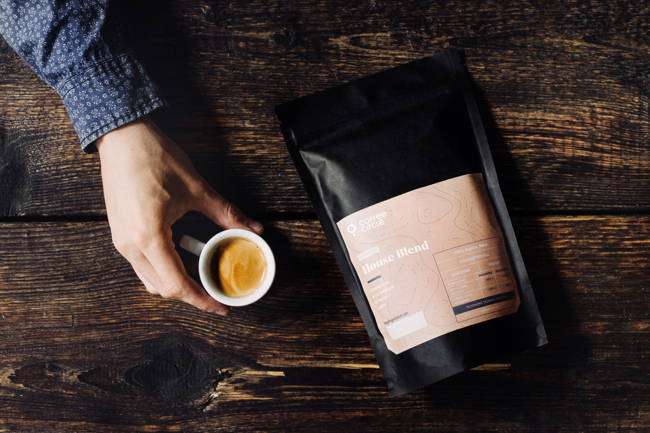 Back to the initial question

Does this confirm the prejudice? Unfortunately, as is so often the case, the answer is ambiguous. Good coffee depends on so much more than just name and price. Thus, not every Canephora is cheap and poorly processed and not every Arabica is a prime example of gourmet coffee. In fact, only just under 5 % of the Arabica traded worldwide is specialty coffee. The term „Robusta“ is often associated with poor quality, but it is worth looking outside the box. There are definitely tasteful and complex so-called „Fine Robusta“, which are cultivated at similar altitudes as Arabica and are processed with great care. In high-quality Canephora, for example, one can often find flavours of various stone fruits, such as cherries, raisins, berries, as well as floral and often nutty, spicy notes.

The market for Fine Robusta is still quite young at the moment, but in times of climate change it will take on an increasingly important, country-specific role. In addition, the full potential is not yet foreseeable at the moment, as more attention has only recently been paid to quality than to high productivity. The bad reputation is mostly based on correctable deficiencies in cultivation and processing, but not on the species itself as is often claimed. In the past, there were virtually no price premiums and consequently no high motivation for quality improvements. As the market for Arabica speciality coffee has already shown in the past, the market for Canephora could also benefit from a qualitative differentiation.

Are we really paying fair prices?