The best coffee-growing conditions extend across the entire equator – in the so-called coffee belt. When it comes to growing and harvesting, the secret lies in care and timing. In this article, we summarize the conditions under which coffee grows best and what is important in harvesting and processing.

When growing coffee, parallels can be found with wine. The composition of the soil and the amount of sunshine and rainfall during the ripening period have a strong impact on the taste of coffee. The sensitive coffee plants need a balanced climate throughout the year, day and night, without extreme heat and cold, as well as sufficient precipitation and plenty of shade.

Soil quality plays a major role, because the coffee plant needs nutrient-rich soil. Ideally, this has a pH value between 5 and 6, i.e. it is slightly sour. In particular, the volcanic soils that are very common in Ethiopia have this characteristic and are also very rich in nutrients. As with wine, soil characteristics are referred to as terroir.

Coffee bushes grow up to 3.5 meters tall and are found in wild form only in Ethiopia. The bushes bear fruit, which we call coffee cherries. Coffee beans are the seeds of these cherries. Unlike local cherries, the kernel consists of two parts or two coffee beans. 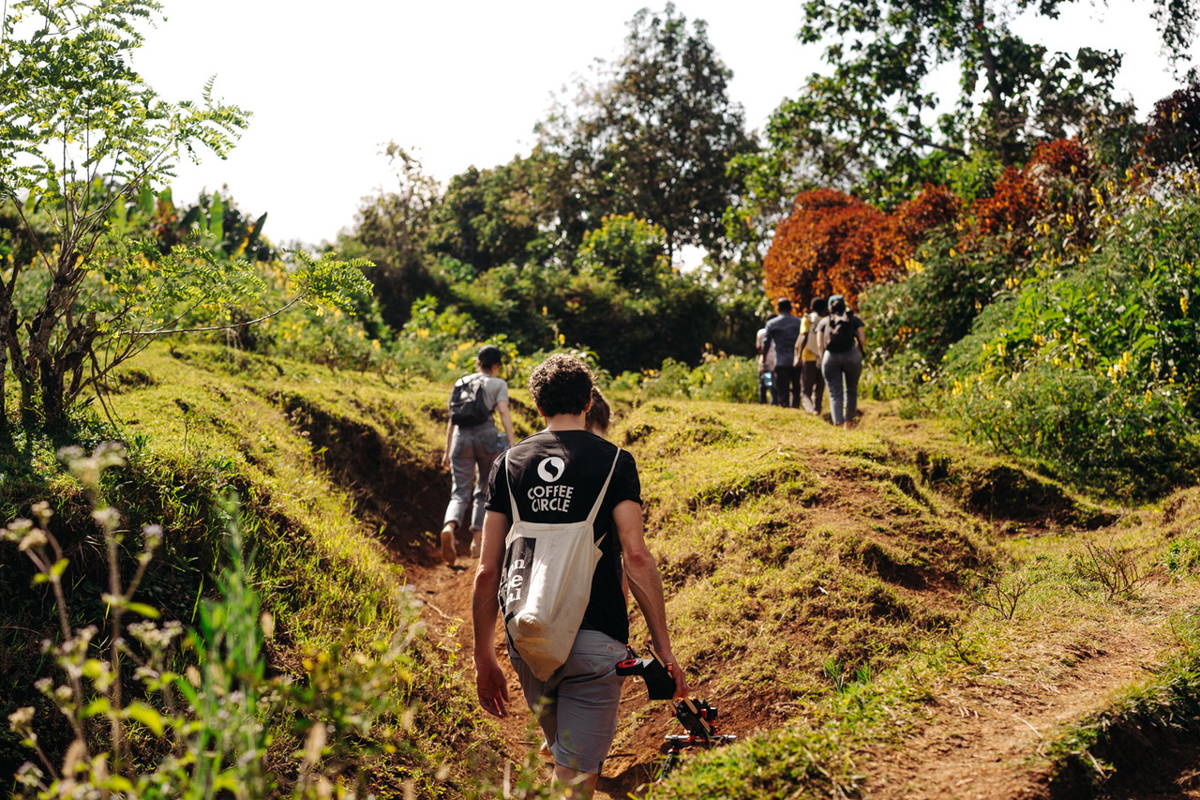 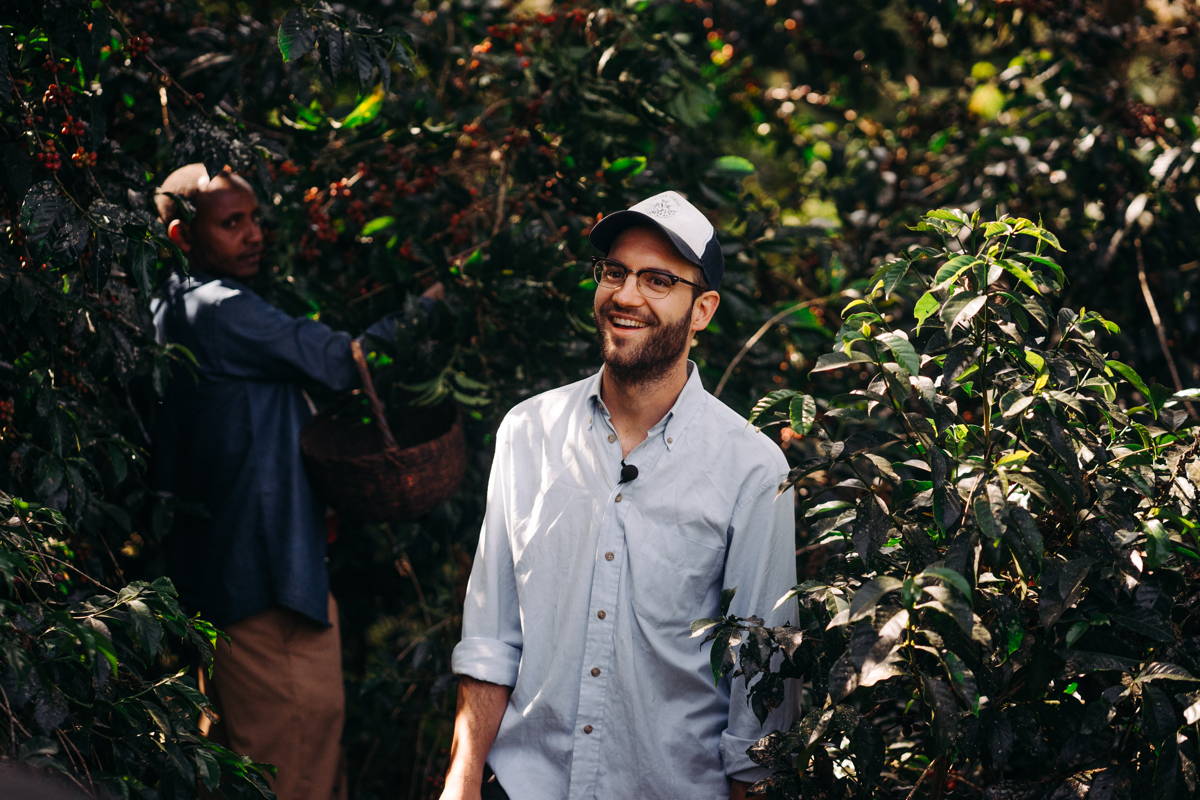 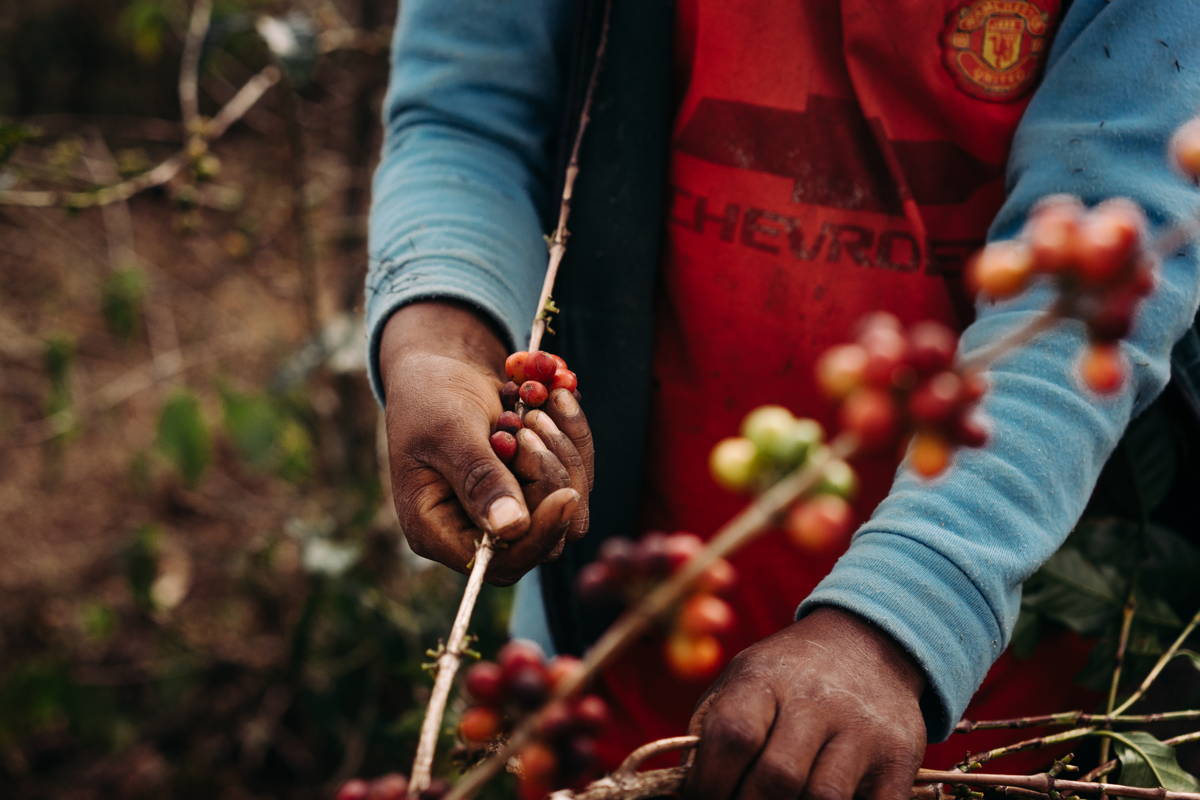 Coffee bushes grow best with a rainfall of around 1,500 – 2,000 liters per square meter and dosed sunlight. Ideally, coffee plants are planted on slopes or in forest gardens. There, the bushes grow between shade trees – or on plantations under nets that provide shadow. All our Ethiopian coffees are forest garden coffees. They grow in natural, wild mixed forest stands of small farmers. This form of cultivation also has the advantage that the trees protect each other from a number of parasites. This allows coffee farmers to avoid the expensive use of fertilizers and pesticides, which is contrary to organic certification. In Colombia, coffee plants are mostly cultivated on slopes under shade trees on so-called fincas, or private coffee farms. 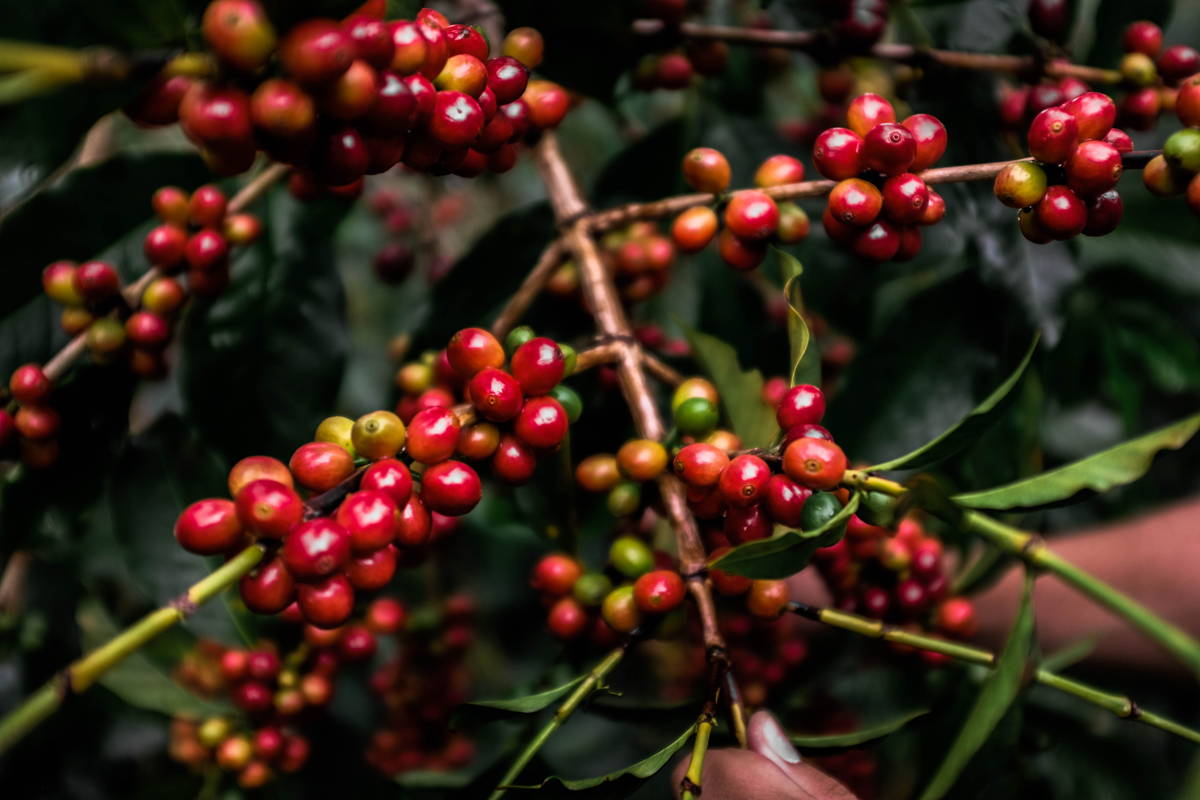 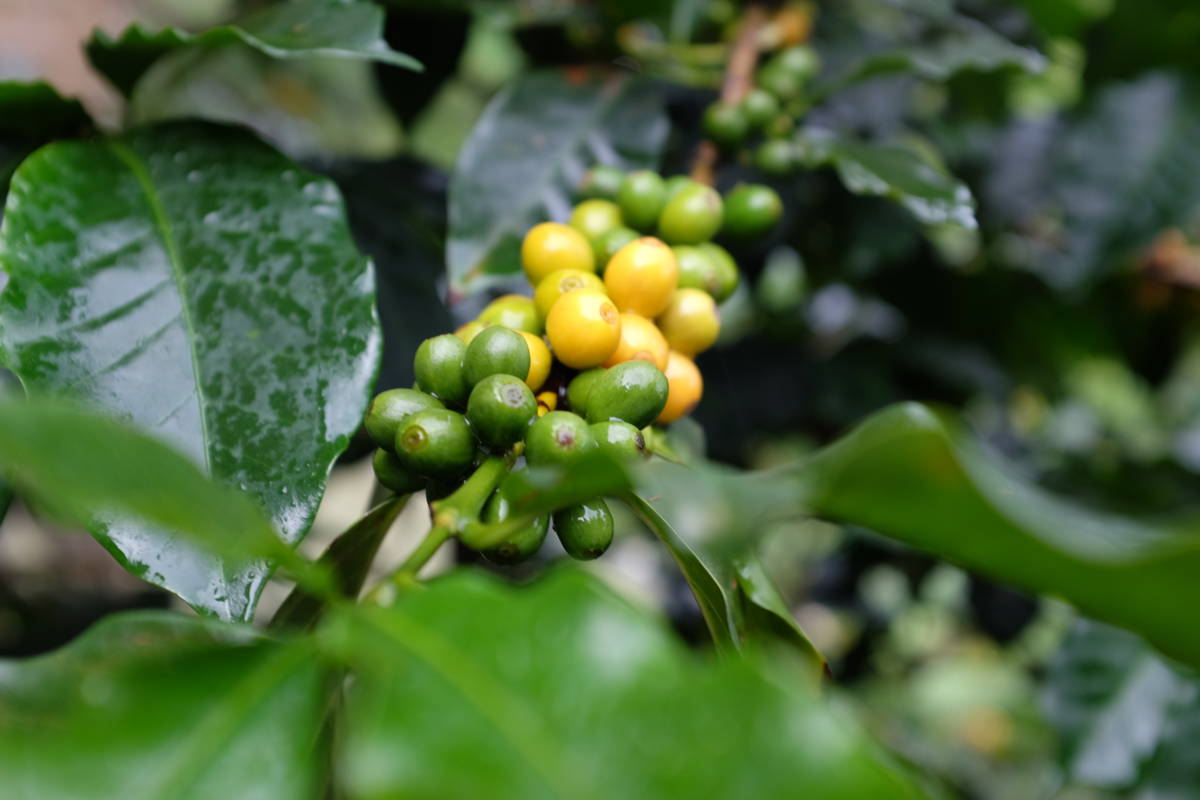 There are more than 60 types of coffee and countless varieties

We distinguish about 60 different coffee varieties, but only two of them are important for the world market. One is Coffea Arabica and the other is Coffea Canephora, whose most important sub-genus is Robusta. Arabica plants now account for about 70 % of global coffee crops. There are numerous Arabica varieties, such as Magaogype (also called elephant beans because of their size) or Bourbon. Robusta accounts for just over 30% of the world’s coffee crops. Arabica plants are highland plants and thrive best at altitudes above 900 meters, with an average temperature of 18° – 22 °C. At cool altitudes, coffee cherries ripen more slowly. This results in more pronounced aromas.

The higher the growing altitude, the lower the average temperature and the slower the coffee cherry grows. With slow growth, the bush, much like wine, has more time for its cherries to grow and develop. This has a positive effect on the strength and variety of flavors in the coffee beans. Since Robusta plants can tolerate higher temperatures and also greater temperature fluctuations than Arabica plants, they can also be cultivated in lowland areas – for example, on plantations in Brazil and Vietnam, the two largest global coffee producers. The maximum possible average temperature for Robusta plants is 24° – 26°C.

The coffee harvest is as complex as the grape harvest

The ripening period of the coffee cherries in our Ethiopian highland coffees is up to ten months. During the ripening period, the cherries change color from green to yellow to red (with the exception of varieties such as yellow Bourbon, this variety remains yellow in its ripest state). Only when they are red do the cherries form the basis for aromatic green coffee and are harvested. The pulp of coffee cherries in this state tastes fruity and slightly sweet.

Neither green, nor overripe black cherries should be harvested. Both would greatly and negatively affect the taste of the coffee. Like unripe grapes, green cherries contain only immature acids and little aromatic coffee flavor. Overripe cherries, on the other hand, taste rotten and fermented.

The time of harvest depends on geographical and climatic conditions and therefore varies from one growing country to another. In Ethiopia, coffees are harvested between October and January. The exact times differ between regions and depend on the climate or, in particular, the amount and distribution of rainfall.  In Ethiopia, there is one coffee harvest per year, while in Colombia there are between one and three harvests per year, depending on the growing region.

Our coffees are harvested carefully by hand

The care taken during harvesting has an essential influence on the possible coffee flavor. A distinctive feature of our Ethiopian and Colombian coffees is that the cherries are picked by hand.

Through years of experience, the coffee farmers and harvesters have a trained eye and harvest only equally ripe cherries.

.
Strictly speaking, this involves twisting them off the bush so that the pulp remains intact until further processing. As with good wine, it is a selection of the best cherries (or grapes). These are picked daily, because coffee cherries do not ripen at the same time, even within one area, but are spread out over a period of two to three months.

Hand-picking takes a long time and is quite exhausting, because the coffee trees are spread out on slopes or in the shady forest. But this time-consuming process is the basis for specialty coffees.

On plantations, coffee cherries of all degrees of ripeness are combed off the bushes. When the majority of the fruit is ripe, all the cherries are harvested at once – regardless of whether each individual cherry is ripe. In this process, workers strip the cherries from the branch with a comb („stripping“). In the large plantations (especially in Brazil and Vietnam), machines are used for this type of harvesting, which drive down the rows of bushes along laid-out paths. The „stripping“ method leads to a significantly reduced quality due to the mixture of the different degrees of ripeness. In some cases, the cherries that cannot be used are sorted out after harvesting. However, this is usually not done very thoroughly, as farmers do not like to throw away harvested cherries if they are still receiving proceeds for them. The „stripping“ harvesting method is much cheaper and is one of the reasons why coffee can be offered so cheaply in Germany.