With every cup of coffee you support our drinking water project in the Ethiopian coffee regions. In cooperation with Welthungerhilfe, we are improving the drinking water supply in various coffee cooperatives. We started in several cooperatives in the Limu region, from which we have been sourcing the popular Limu coffee since 2010.

In regular discussions with coffee farmers and villagers we learned about their problematic living conditions, which are primarily characterized by the lack of access to clean drinking water. Together we did something about it and launched our WaSH project, which consists of several sub-projects (drinking water supply; sanitation; hygiene training and biodiversity). Thanks to the great progress of the teams on the ground, we are now reaching almost 40,000 people with clean water (as of November 2021)!

Why was this project so important?

85 percent of the Ethiopian population lives in rural areas, like the coffee farmers in our partner cooperatives. Here, life is characterized by the lack of drinking water and sanitation, which causes 60 percent of all diseases and 15 percent of all deaths (source: Welthungerhilfe 2014). In Ethiopia, 17,000 children die each year from diseases caused by contaminated water and poor sanitation (UNICEF 2014). Over 60% of the Ethiopian population does not have adequate access to clean water (UNICEF 2012) and only 31% of schools in Ethiopia have a water supply (UNICEF 2012).

Most of the cooperatives from which we source our coffee do not have direct access to clean drinking water, which leaves many residents to fend for themselves with contaminated water. Therefore, we decided to implement the construction of a drinking water system in close cooperation with the communities and with the support of Welthungerhilfe. In the meantime (as of November 2021), the local coffee cooperatives have two functioning water sources and several water kiosks. The Homecha source was financed with Coffee Circle donations amounting to €228,221, the development and commissioning of the Shaki source with donations amounting to €368,208. 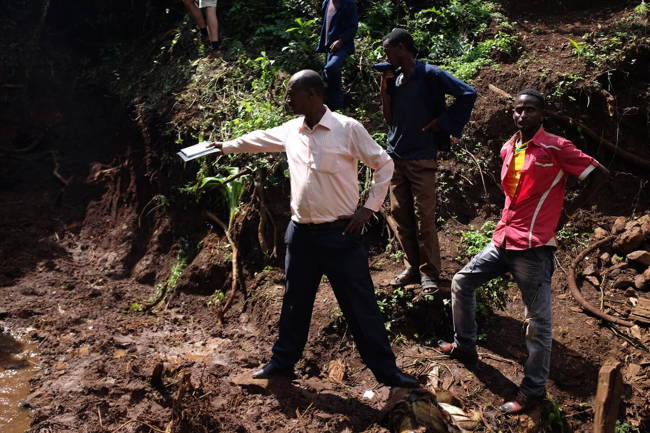 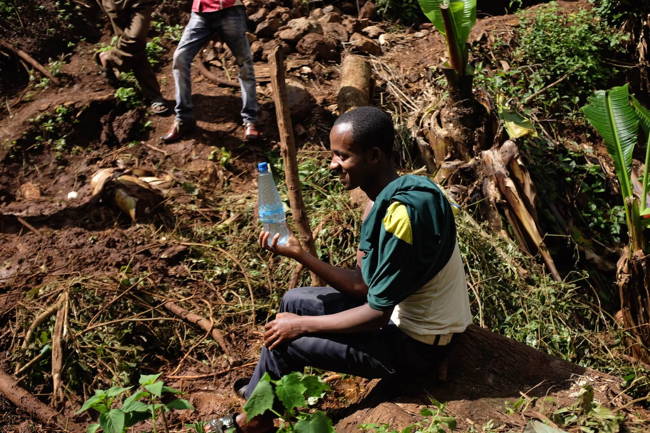 How was the project implemented?

Without the failed school project in Doyo, the drinking water project in Ethiopia might never have been implemented on this scale.

After a few projects that were either not implemented (the school expansion in Doyo, as we describe below) or whose results fell far short of our expectations (the organic certification of several Ethiopian cooperatives), we had developed a sense of which projects were vital, feasible and promising. For example, we realized that farmer trainings and cupping labs are more efficient for increasing coffee quality and farmers’ wages than labeling coffees with an EU organic certificate.

Without the failed school project in Doyo, the drinking water project in Ethiopia might never have been implemented on this scale. The plan was this: Together with coffee farmers and villagers, local handicraft companies and the local government, we wanted to expand the existing elementary school in the Doyo cooperative, which is responsible for the education of 1,086 children, and equip it with furniture. Due to the poor condition of the school building and interior furnishings, adequate education for the children of the coffee farmers was hardly possible. Coffee Circle managing director and co-founder Martin Elwert was on site to plan both the expansion of the school in Doyo and the supply of clean drinking water to the communities.

Our Coffees from Ethiopia

Stephan Eicke: Martin, what became of the school project in Doyo?
Martin Elwert: We put the money raised for it into the water supply project. Both were originally planned. The expansion of the school in Doyo was to follow the construction of the Satellite Primary School in the Limu region. We were on site, talking to the operators and teachers of the school in Doyo, a secondary school. They needed two new classrooms plus equipment. In the course of the following months, we collected almost 20,000 € for the implementation. However, when we returned to the site to discuss the next steps, we found that the school suddenly had two new classrooms. „What’s going on here? You said you needed some.“ In fact, Plan International, a large NGO, had been on site between our visits. This is not unusual: large organizations with lavish budgets support projects in the region, then find they have money left over and consider where to invest it. That’s what Plan International did. They spontaneously built two classrooms. That was great for everyone involved, of course.

For the clean water supply, you worked with Welthungerhilfe as an NGO partner…
Yes. It took me almost two years to find an NGO that was willing to tackle this project with us and support us on the ground. Water Aid had linked me with some American NGOs. But they had two problems: First, they could not make their own decisions and had to coordinate every step with headquarters in Houston or Washington. Second, they were not willing to tackle projects in the regions where we wanted to tackle them. They told us clearly, „We have a project in the South that you can donate to, and we have one in the West that you can donate to.“ They were not flexible enough. Also, some of them had a religious mission. That was out of the question for us.
After two years, I walked into the Welthungerhilfe office in Addis Ababa and ran into Manfred and Lanka. They had a bit of time. I complained to them about my experiences and explained that I needed someone to set up a large water and sanitation project with us. We’ll finance it. „We can do that,“ they said. „How? You can decide that on the spur of the moment? Here? Now?“ „Sure we can.“ „You guys don’t have to call Houston or Washington?“ „No. We’ll just do it now.“
That was a huge stroke of luck for us. You can’t handle huge projects like this on your own.

However, it was not the laying of the pipes that proved to be the most time-consuming part of the drinking water project, but the evaluation and persuasion work that Welthungerhilfe had to carry out as our representative on site: First of all, it had to be determined where springs existed and how strong they were. Then it was a matter of asking the inhabitants of the affected villages for permission and convincing them that drilling for springs and laying the pipes would be done with great consideration and that they would benefit directly from it. Concerns had to be eliminated that sacred land would be destroyed.

The importance of this persuasion soon became apparent: after everyone had agreed and the first well was put into operation to supply the village with clean drinking water, a local shaman declared the well sacred. This led to thousands of people making pilgrimages to the site from as far away as 100 kilometers to taste the sacred water. As a consequence, the springs were quickly ruined and had to be renewed. In the meantime, the situation has calmed down – after another shaman claimed as a countermeasure that the bubbling water was cursed. 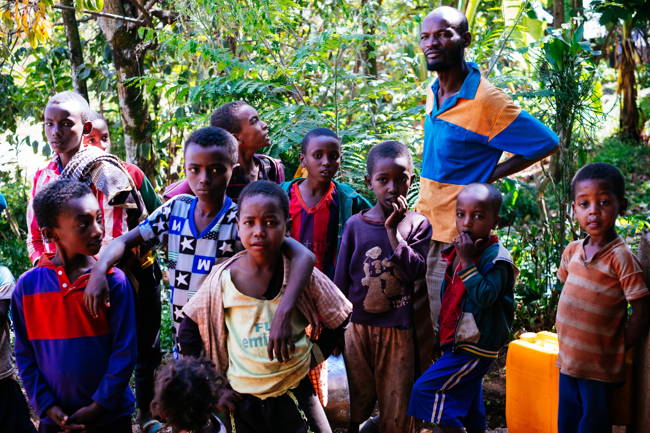 In November 2015, we began securing the Homecha spring, located just under a 20-minute walk from the Doyo cooperative, in the Mana government zone. In order to provide the surrounding villages with clear water as well, the pipe ran through a section of forest to the nearest water point, 4.5 km away. Since then, the cooperatives of Doyo Bikila and Doyo Tolie have also been supplied with clean drinking water. For this purpose, pipes had to be laid that are about 1.5 m deep in the ground. The inhabitants can then collect the water from the water kiosks to which it is delivered.

The kiosk is the point of contact for all residents to pick up the clean drinking water. This is piped from the developed sources first to water reservoirs and from there to the respective kiosks. In October 2017, the first five of them were already completed. Unlike other kiosks, residents pay nothing for the supply of clean drinking water. By December 2019, nine water kiosks were completed and in use. Three more were added in 2020.

Have a look where we implement our project!

To ensure that the water distributed in the kiosks is not contaminated, some precautions were taken. As part of our safety concept, trees were planted on the land around the spring. They naturally consolidate the soil with their roots so that landslides do not harm the spring or contaminate the water. In 2019, we added an electric pump to the water system so that we can also supply clear water to a school and health center on higher ground. Several water storage tanks were built to serve kiosks over 14 km by pipeline.

In 2019, the Shaki spring was developed. Here, 30 km of pipelines had to be laid to transport water from the spring to the reservoirs and then to the kiosks. Ten water kiosks make it possible to supply nearly 12,000 people with clean water. In Mana District and Seta Chekorsa District, more than 15 km of pipes were laid in 2020, providing clean water connections to an additional five schools and other facilities, such as mosques and churches. To provide people with clean drinking water, food and other necessities, three more kiosks were built in Seka Chekorsa District. In Mana District, four already constructed kiosks were equipped with solar panels so that it is possible to charge cell phones and lights there.

The supply of clean drinking water to the communities and the maintenance of the springs, reservoirs and kiosks is a long-term project that we will continue to implement locally with the support of Welthungerhilfe. The successes achieved are to be secured in the long term and measures strengthened. In the fall of 2021, we committed to further improving the living conditions of farmers in Mana, Seka Chekorsa and Gomma. Our collaboration with Welthungerhilfe has been extended until December 31, 2024. The aim is to establish a robust foundation for the effective strengthening of the existing WaSH system: Capacities are to be strengthened, more kiosks built, reservoirs and springs maintained and supplemented. We have committed to provide €700,000 in donations for this purpose. The planning and evaluation phase started on September 1, 2021 and will last six months. We will of course keep you informed about the next steps and concrete implementation plans.

A report by Stephan Eicke 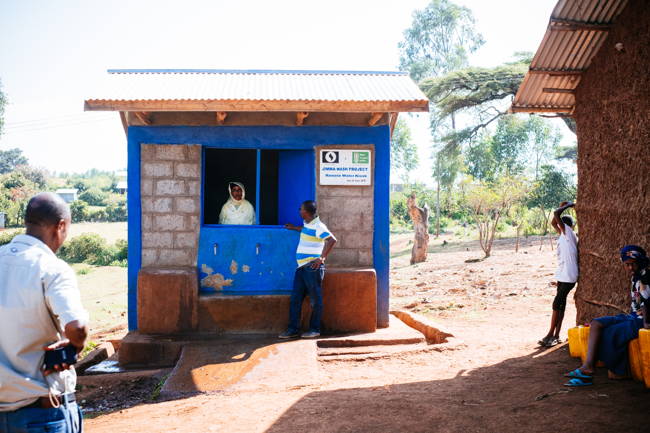 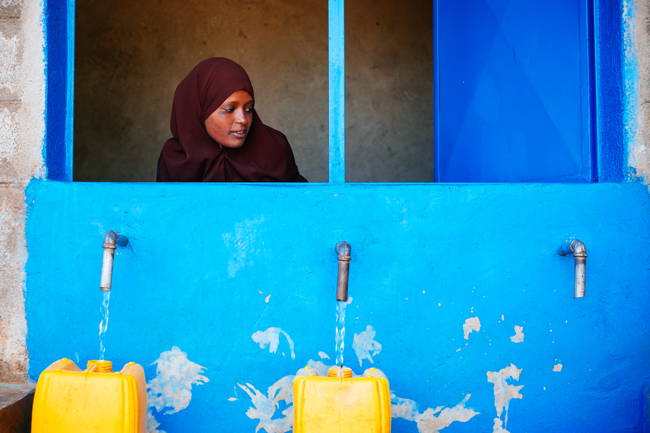 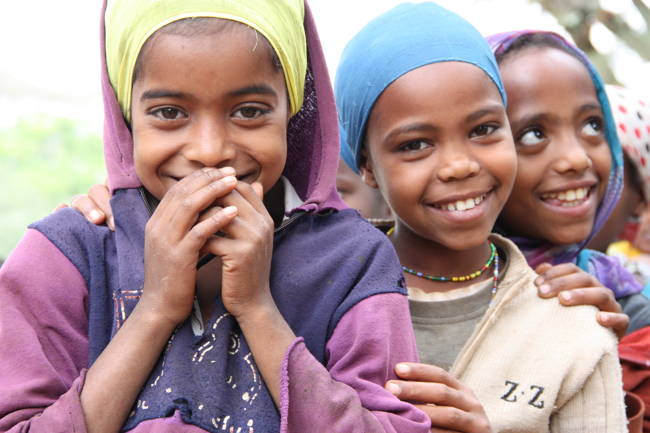